" As a distinguished medical teacher he taught one of the most difficult subjects, Pharmacology. But he became a source of inspiration through his writings and scientific outlook for many of his students. In the eighties, along with many likeminded souls all over India he joined in Rational Drug Movement-an endeavour to stop irrational use of drugs. He edited BODHI, a bimonthly medical bulletin and Asukh-Bisukh, a Bengali periodical for common people and spread awareness about scientific approach to medicine. He was also very expressive against superstitions and irrational beliefs and his writings were published in Utsha Manush- a strong force in the Peoples Science Movement in Bengal. Professor Sarkar has later on moved to a small village in Bankura and started a Project-AMADER HASPATAL. It is a model of low cost scientific medical care which is run on donation from common people. "

" Dr Gautam Roy has completed his Graduation, Post Graduation and Ph.D degrees in Elect. Engg., Instrumentation Engg. & Computer Science respectively from Jadavpur University. Initially he was attached with different engineering colleges and institutes as Faculty member for more than 18 years. After that he joined ICAR-National Institute of Research on Jute and Fibre Technology (NIRJAFT) in the year 2000 as Senior Scientist. In the year 2008 he became Principal Scientist and in the year 2012 he became the Head of the Quality Evaluation & Improvement Division of the institute. He also worked as the Director of the institute beside his activities as Head of the Division. " 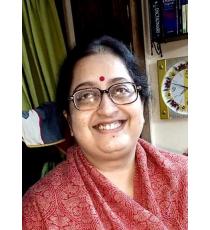 " Subrata Dasgupta is a singer and a creative writer with a Doctoral degree in Applied Psychology. She is interested in human creativity and its role in mental well being. She has a familial exposure to the working of an NGO dedicated to the services of underage women by providing them shelter and means of livelihood. She is also a Professor of Calcutta University in the Department of Applied Psychology and currently the Departmental Head. "

2021 © All Rights Reserved | Designed and Developed by SBM Global Servces